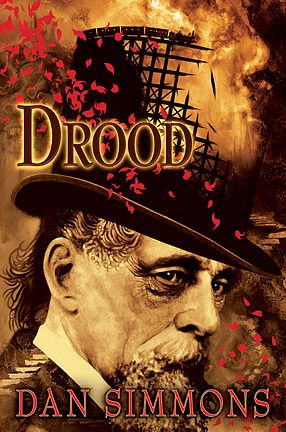 On June 9th, 1865, Charles Dickens, “the most popular novelist in England, perhaps the world,” boards a train bound from Folkstone to London, accompanied by his youthful mistress, the actress Ellen Ternan. Shortly afterward, the train derails near the village of Staplehurst, toppling into an abyss. Dickens emerges from the carnage physically, if not mentally, unscathed. And he has a story to tell.

He tells it, with typical Dickensian brio, to his friend and occasional collaborator, Wilkie Collins, the narrator of this magisterial novel. The story concerns an otherworldly figure who calls himself “Drood,” and who moves through the wreckage like a pale, unholy apparition. The mysteries surrounding Drood form the heart of an epic narrative encompassing ancient religious practices, subterranean cities, hallucinatory visions, madness, murder, and the limitless power of the creative imagination. The result is a fever dream of a book that vividly recreates the sights, sounds, and smells of 19th century London, while illuminating the final years of a great writer’s life. Absorbing, moving, and constantly surprising, Drood shows us Dan Simmons at his inimitable -- and mesmerizing -- best.

#351 - a new book, but when we inspected it before shipping realized there was a spot of discoloration on the front board as pictured.

This is a unique one of a kind book, it is not Lettered or marked PC, each book is bound as a lettered book and housed in a lettered  traycase BUT the limitation line is designated "Founder's Copy". No other copies of this book were designated in this manner, this is your chance to own the rarest and most unique Lettered State of this book.