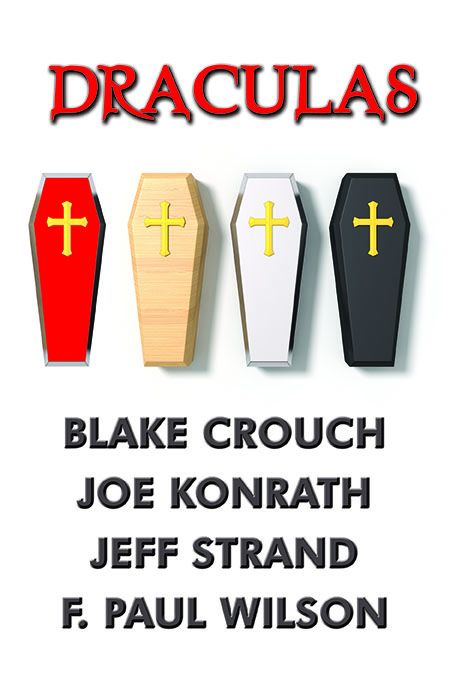 DRACULAS is a collaborative novel by F. Paul Wilson and “his guys.”

Mortimer Moorecook, retired Wall Street raider, avid collector, is losing his fight against cancer. With weeks to live, a package arrives at the door of his hillside mansion—an artifact he paid millions for…a hominoid skull with elongated teeth, discovered in a farmer’s field in the Romanian countryside. With Shanna, his beautiful research assistant looking on, he sinks the skull’s razor sharp fangs into his neck, and immediately goes into convulsions.

OPENS THE DOOR TO AN ANCIENT EVIL…

A rural hospital. A slow night in the ER. Until Moorecook arrives strapped to a gurney, where he promptly codes and dies.

WHERE DEATH IS JUST THE BEGINNING.

Four well-known horror authors pool their penchants for scares and thrills, and tackle one of the greatest of all legends, with each writer creating a unique character and following them through a vampire outbreak in a secluded hospital.

The goal was simple: write the most intense novel they possibly could.

A WORD OF WARNING

Within these pages, you will find no black capes, no satin-lined coffins, no brooding heartthrobs who want to talk about your feelings. Forget sunlight and stakes. Throw out your garlic and your crosses. This is the Anti-TWILIGHT.

– (4) excerpts from the authors’ other works

– The short story “Serial” by Crouch and Konrath

– The short story “A Sound of Blunder” by Konrath and Wilson

– An exclusive, behind-the-scenes look at the writing of DRACULAS, delivered through a collection of over seven hundred emails between the writers as they were brainstorming and writing the book