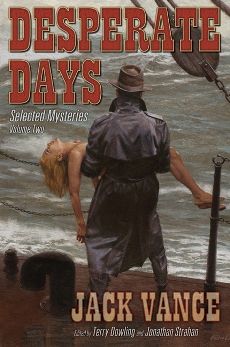 Jack Vance has long been F&SF’s grand master of regional science fiction, creating living, breathing locales on distant worlds or on our own fabulously transformed, often magical future Earth that are second to none.

But at the same time he was giving us these vivid, award-winning fantasy and science fictional settings, even as he was exploring the far corners of this world as a keen and inveterate traveller, Jack was vigorously pursuing an exciting and promising parallel career as a writer of mystery and suspense novels under his given name of John Holbrook Vance.

The three JHV mysteries featured here, The Fox Valley Murders, The Pleasant Grove Murders and The Dark Ocean were produced during the mid-60s, in the same fertile years that Jack sent Cugel the Clever off exploring the Dying Earth in The Eyes of the Overworld, left Sklar Hast to face danger among the kragen in The Blue World and gave Kirth Gersen a third Demon Prince to track down in The Palace of Love.

Even as Jack was hard at work producing high adventure in such interstellar “regional” locales as Sogdian, Sarkovy and Blue World, he found time to don his other hat and concoct always interesting, often life-changing, sometimes desperate, adventures for Sheriff Joe Bain in Central California’s San Rodrigo County, a Vance setting as intricate, vividly rendered and closely observed as any of his SF and fantasy creations. So, too, he gave personable, wilful naïf Betty Haverhill all manner of life and death thrills aboard the Italian freighter Garda on its way to Europe.

A follow-up volume to the widely acclaimed Dangerous Ways: Selected Mysteries, Subterranean Press is proud to present Desperate Days: Selected Mysteries 2, a book not just for the true connoisseur of the master’s distinctive blend of intrigue and derring-do, but for anyone who relishes a good, well-told detective yarn set in an unforgettable time and place.

Lettered: 26 copies,  signed by author (this was the only state of this book what was originally signed by Vance), housed in a custom traycase, we offer for sale a "PC" copy which is identical in every way to a lettered copy but has the letters "PC" in the limitation line, the "PC" denotes "Publisher's Copy" and is one of a very few copies produced for use by the Publisher, usually for contributors.