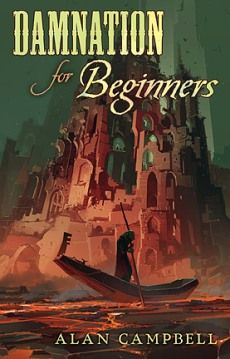 In his 2006 novel, Scar Night, Alan Campbell introduced readers to an intricate, richly imagined fantasy world, the world of the Deepgate Codex. In subsequent novels and novellas (Iron Angel, Lye Street), Campbell broadened and deepened his ongoing portrait of that astonishing milieu. With Damnation for Beginners, he gives us the most compelling—and surprising—installment to date.

The story begins in the beleaguered city of Cog. The protagonist, Jack Aviso, is himself a cog, a functionary in the soulless, profit-obsessed enterprise known as the Henry Sill Banking Corporation. When a routinely corrupt business transaction shatters both his marriage and his well-ordered life, Jack finds himself—quite literally—in Hell, where he embarks on a perilous, unprecedented journey of revenge.

Moving from the urban desolation of Cog City to the surreal landscape of a marvelously described Hell – a region unlike anything ever encountered in contemporary fiction – Damnation for Beginners is an utterly unique creation, one that combines the baroque pleasures of a powerful imagination with a cogent critique of an all too familiar society dominated by rampant, runaway greed. The result is a strange, wonderful, and terrifying tale, the work of a master storyteller with a wholly original point of view.

Limited to 250 signed and numbered copies, bound in leather