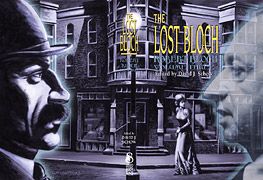 With great care Stanley Colfax laid his plans for his own funeral -- except for the nails in the coffin! It was murder!

The shambles of Gein, the murders of Holmes, and the bounty of Bloch are explored in The Lost Bloch, Vol. Three: Crimes and Punishments -- a monstrous mix of true crime and made-up mystery, spiced with a dash of the supernatural in the fetching form of a belle from Hell.

Perpetuating the acclaimed reputation garnered by Volume One: The Devil With You! and Volume Two: Hell on Earth, this newest entry in the Lost Bloch series resurrects novelette and novella-length Blochiana, rarely or never-reprinted pulp pieces often overlooked because they were never published as stand-alone books.

The centerpiece of Crimes and Punishments is the novella-length study, "Dr. Holmes' Murder Castle" -- the closest Bloch ever came to writing a true-crime book, chronicling the homicidal reign of terror perpetrated by H. H. Holmes, America's most outrageous (and least-known) serial killer. Bob's prodigious output for the classic mystery pulps is represented by "It's Your Own Funeral" and other selections, while his more fanciful and fantastic side gives vent to the novella "Hell's Angel." The chaser? A stiff shot of Bob's observations on another real-life murderer, "The Shambles of Ed Gein."

But wait, there's more -- another inimitable interview with Bob in his own words, conducted by Douglas E. Winter, plus an expository piece by series editor David J. Schow, and a celebrity foreword by world-famous author, critic and illustrator Gahan Wilson.

Limited: 1000 autographed and numbered copies bound in full cloth, with a full-color dustjacket