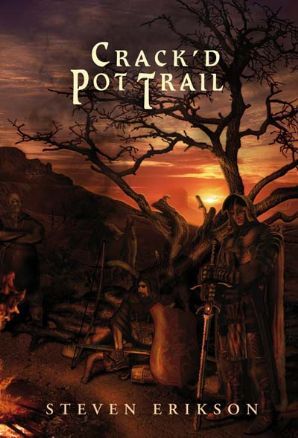 It is an undeniable truth: give evil a name and everyone's happy. Give it two names and . . . why, they're even happier.

The intrepid necromancers Bauchelain and Korbal Broach, scourges of civilisation, raisers of the dead, reapers of the souls of the living, devourers of hope, betrayers of faith, slayers of the innocent and modest personifications of evil, have a lot to answer for and answer they will. Known as the Nehemoth, they are pursued by countless self-professed defenders of decency, sanity and civilization. After all, since when does evil thrive unchallenged? Well often not this time.

Hot on their heels are the Nehemoth-anai, avowed hunters of Bauchelain and Korbal Broach. In the company of a gaggle of artists and pilgrims, stalwart Mortal Sword Tulgord Vise, pious Well Knight Arpo Relent, stern Huntsman Steck Marynd, and three of the redoubtable Chanter brothers (and their lone sister) find themselves faced with the cruelest of choices. The legendary Crack'd Pot Trail, a stretch of harsh wasteland between the Gates of Nowhere and the Shrine of the Indifferent God, has become a tortured path of deprivation.

Will honour, moral probity and virtue prove champions in the face of brutal necessity? No, of course not. Don't be silly.

Lettered of traycased edition  It is our understanding that PS Publishing sold 26 lifetime subscriptions, as a perk of that subscription the purchaser would receive a copy of the signed state of a particular book but instead of a number in the limitation line, it would contain a letter, each subscriber was assigned a letter, in all other aspects the book is identical to the "Limited" copy. 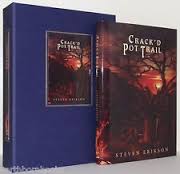