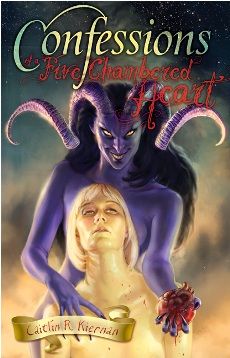 Confessions of a Five-Chambered Heart

Confessions of a Five-Chambered Heart is the follow-up to Caitlín R. Kiernan’s World-Fantasy Award nominated The Ammonite Violin & Others, a collection that drew comparisons to the writings of such luminaries of the macabre and surreal as Angela Carter, Thomas Ligotti, Shirley Jackson, and Harlan Ellison. Here, again, in her eighth collection, we visit the borderlands where the weird, horrific, mythic, and erotic intersect. Once again, Kiernan sets her masterful, intoxicating prose to the task of retelling fairy tales, spinning sensual post-Lovecraftian yarns, and blurring the lines between pain and pleasure. Here is a celebration of the bizarre and beautiful, and a marriage of unlikely worlds. From a reverence of the dead to the sacrifices the living make to unspeakable gods, from clockwork dreams to tales of merciless revenge, Kiernan blurs the artificial lines of genre, and shows us a world where there is no division between the light and dark.

Limited to 600 signed and numbered leatherbound copies, including the bonus hardcover collection, The Yellow Book