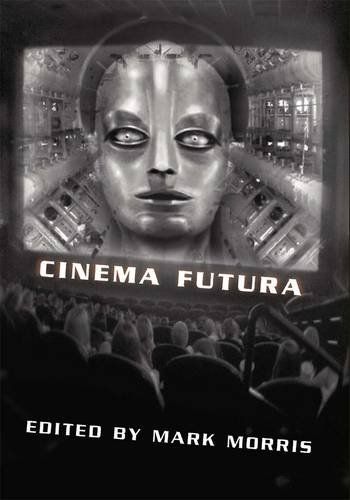 Following on from the huge critical and commercial success of Cinema Macabre (2006), comes Cinema Futura, which will be launched by PS Publishing at the British Fantasy Convention, September 17-19, 2010.

Cinema Macabre, a book of horror movie essays by fifty genre luminaries, was edited by Mark Morris, and went on to win the British Fantasy Award, and to be nominated for both an HWA Bram Stoker Award and an International Horror Guild Award.

Now Cinema Futura, containing an all-new roster of contributors and movies, is set to emulate that success. This time featuring a line-up of sixty genre luminaries, Cinema Futura is even bigger than its predecessor.

And what a stellar line-up it is! We have the inimitable Joe Lansdale extolling the virtues of Invaders of Mars, top crime writer John Connolly waxing lyrical about The 7th Voyage of Sinbad, and author ofThe Prestige, Christopher Priest telling us why he loves La Jetée. With further contributions from such top genre names as Lucius Shepard, David J. Schow, Alastair Reynolds, Stephen Volk, Sarah Pinborough, Robert Shearman, Peter F. Hamilton, Steven Erikson and many more, Cinema Futura is set to become an essential addition to the bookshelves of every movie buff and science-fiction fan worldwide.