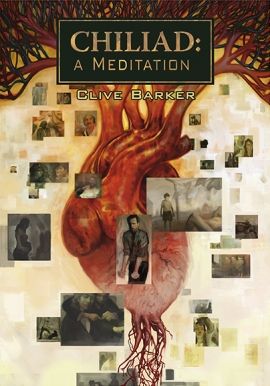 Welcome to the world of Chiliad, an astonishing two-part novella by the incomparable Clive Barker. A brilliantly composed narrative filled with unforgettable images, this visionary meditation on time, history, and human suffering is surely one of Barker’s most distinctive—and distinguished—creations.

Chiliad consists of two interrelated stories, stories filtered through the melancholy imagination of a narrator perched on the banks of a river that flows backward and forward through time. The first movement, “Men and Sin,” takes place in the millennial year of 1000 AD. The second, “A Moment at the River’s Heart,” occurs exactly one thousand years—the length of a “chiliad”—later, as the new millennium approaches. At the heart of these stories are two savage, seemingly inexplicable atrocities, each of which reaches across the centuries to reflect and connect with the other. As the narratives unfold and time becomes increasingly permeable, Barker creates a dark, sorrowful portrait of the ancient human capacity for cruelty and destruction. Writing always with lucidity and grace, he addresses a host of universal concerns, among them the power of guilt and grief, and the need to find signs of meaning in the chaos that surrounds us. In the process, he examines the endless chain of consequences that inevitably proceed from a single act of violence.

At once hugely expansive and deeply personal, Chiliad is a compact masterpiece, a resonant reminder of Barker’s ability to create fictional worlds that enrich and illuminate our own.

Chiliad will feature a full-color dust jacket, as well as duotone endsheets and interior illustrations by Jon Foster.

Limited: 350 signed numbered copies, bound in leather and sold out at the publisher

Lettered: 26 signed copies, bound in leather, housed in a custom traycase and sold out at the publisher