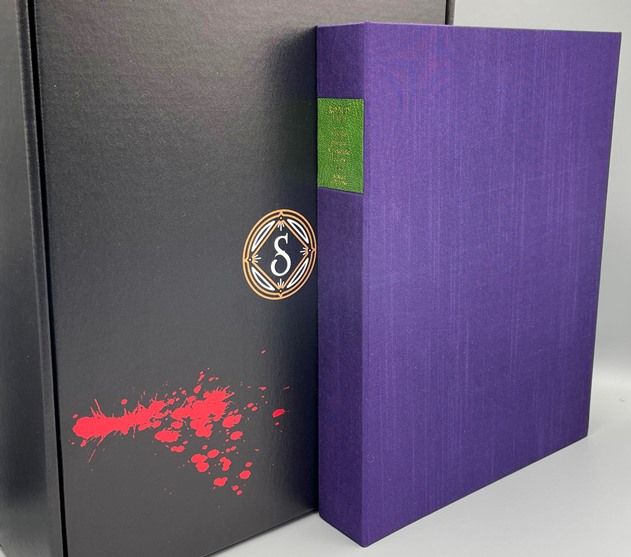 Charlie and the Chocolate Factory - Prototype 1 of 6

NOTE: The purchase of this title does exceed our threshold which requires payment via a wire transfer, layaway is not available for this title at this time.

One of the most beloved children’s stories of the 20th century, Charlie and the Chocolate Factory by Roald Dahl is a masterpiece of pure imagination.

Willy Wonka’s famous chocolate factory is opening at last! But only five lucky children will be allowed inside. And the winners are: Augustus Gloop, an enormously fat boy whose hobby is eating; Veruca Salt, a spoiled-rotten brat whose parents are wrapped around her little finger; Violet Beauregarde, a dim-witted gum-chewer with the fastest jaws around; Mike Teavee, a toy pistol-toting gangster-in-training who is obsessed with television; and Charlie Bucket, our hero, a boy who is honest and kind, brave and true, and good and ready for the wildest time of his life!

First published in 1964, the dark humor and cheerful gruesomeness of Charlie and the Chocolate Factory immediately endeared the book to children, making it an instant bestseller. Rarely has a tale of morality ever been more deliciously entertaining to read, as Roald Dahl’s story warns children and adults alike of the dangers of bad parenting, spoiling children, and self-indulgence.

Dahl drew inspiration for the story from his own childhood. In the 1920s, chocolate makers in England would frequently send samples to school children in exchange for their opinions on new products. Two of the largest competing chocolate companies, Cadbury and Rowntree, would send spies posing as employees to discover the other’s trade secrets. As a result, the companies became highly protective of their chocolate making process. It was a combination of this secrecy and the elaborate, often gigantic, machines in the factory that inspired the author to write his story.

This is a real bound book in a traycase as further explained below.  To our knowledge, this is the only Suntup Prototype to become available on the secondary market.  IT'S RARE! On top of that it is of a title of which ALL states of the book immediatly sold out at the publisher.  Also included is the prospectus for Suntup's Edition of Charlie and the Chocolate Factory as submitted to the Dahl Estate for rights to do this project.  Six were produced as evidenced by the note from Suntup pictured above.  This may be your only opportunity to own this rare edition.  Think of it, we would assume that the 10 purchasers of the Roman Numeraled state also purchased the lettered, limited and artist state - if you are one of these 10 you could possibly be the only one with a real complete set!  Or if you simply want, what is probably the rarest state of the book, here is your chance.

Note: there appears to be one blemish in the leather on the back bottom corner as pictured.