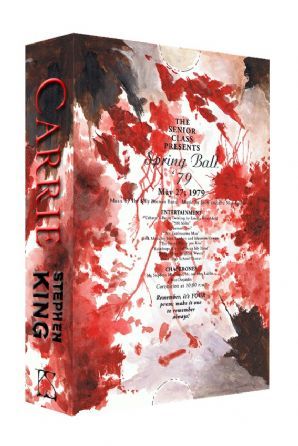 "It reminds me of a cookie baked by a first grader," Stephen King said of Carrie, his first published novel, many years after the book’s 1974 appearance. "Tasty enough, but kind of lumpy and burned on the bottom."

Well, that so-so confection led to a cordon bleu parade of some of the world’s most successful novels by, arguably, the most successful and beloved author in any field. Indeed, King has since gone on, in 2003, to receive the Medal of Distinguished Contribution to American Letters.

But, in the spirit of mighty oaks from little acorns growing, Carrie, a brand-new blustering debut novel about a put-upon girl with menstrual problems written by a young wannabe writer, was indeed a humble beginning. And it was a big chance for its publisher.

Carrie was written on King’s wife Tabitha’s portable typewriter while the couple and their then two children were living in a trailer. It started life as a short story intended for Cavaliermagazine, but King dumped the first three pages. Fortunately, his wife noticed the pages in the trash and fished them out, advising her husband to go on and finish the tale . . . but he went one step better: he expanded it into a novel.

"I persisted because I was dry and had no better ideas . . . my considered opinion was that I had written the world's all-time loser."

At the National Book Awards, King did not speak about writing or success or money. He talked about the woman who rescued Carrie from the trash and insisted he keep going. “There is a time,” he said, “in the lives of most writers, when they are vulnerable, when the vivid dreams and ambitions of childhood seem to pale in the harsh sunlight of what we call the real world.

“In short, there’s a time when things can go either way. That vulnerable time for me came during 1971 to 1973. If my wife had suggested to me even with love and kindness and gentleness . . . that the time had come to put my dreams away and support my family, I would have done that with no complaint.” We should all of us give thanks that  didn’t happen.

Limited to 974 copies signed by Glenn Chadbourne, James Lovegrove and Kim Newman, plus a facsimilie signature from Stephen King

To purchase a Matching #'d Set of the titles that have already been published, click here for detals and to order