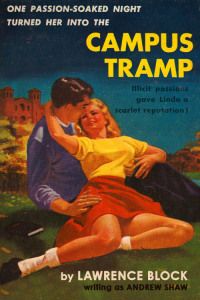 Meet Linda Shepard.She's sick to death with being wholesome.Linda thinks she knows what would cure her ills. She's looking for a man. A capable man. Her first man.The campus of Clifton College is the perfect hunting grounds. It's swelling with men and brimming with liquor, and it doesn't take Linda long to find her prize.Don Gibbs is the editor of the Clifton Record. He's brusque, he's unkempt, and he somehow maintains his broad physique with a strict diet of booze, coffee and cigarettes. Soon enough his piercing intellect and hedonistic ways bring Linda to her knees and lower, lower still.Is she in over her head? As Linda soon discovers, sex can be a dangerous game... Almost as dangerous as love.Lawrence Block is the bestselling author of over fifty novels, including the much-heralded Matthew Scudder crime series. As a young man in New York, Block wrote pornographic paperbacks for outfits such as Nightstand Books to publish under their own house pseudonyms. In this case, Campus Tramp was released as the work of Andrew Shaw; examined retrospectively, however, it has Block written all over it.The year is 1960 and the setting is Clifton College, a thinly disguised analog for the real-life Antioch College, Block's own Alma Mater, just outside Yellow Springs, Ohio. Campus Tramp is loaded with references to Antioch's landmarks, personages, history and... reputation.Whether read as a time capsule from the eve of the sexual revolution traversing taboo topics like homosexuality and abortion, or just as a retro sex romp by a masterful writer at the dawn of his career, Campus Tramp, like its titular protagonist Linda Shepard, has something to offer everybody.