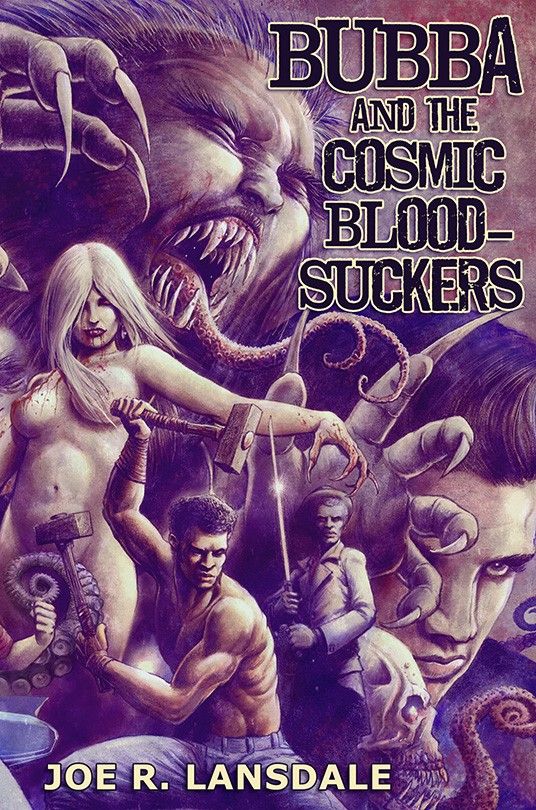 Bubba and the Cosmic Blood-Suckers

Before Bubba Ho-Tep, there was Bubba and the Cosmic Blood-Suckers.

Subterranean Press is thrilled to announce the novel-length prequel to the classic story, “Bubba Ho-Tep.”

Part of a secret government organization designed to protect civilians, Elvis Presley and a handful of hardcore warriors set out to save the world from an invasion of hive-minded, shape-shifting vampire-like creatures from a dark dimension who have taken up residence in a New Orleans junkyard.

Besides Elvis, among these righteous warriors is a hammer-wielding descendent of John Henry of railroad fame, a Blind Man who sees more than those with sight, Jack, a strategic wizard, and Elvis’s right hand man and journal writer, Johnny, all thrown in with Raven (real name Jenny) a female recruit who is also a budding pop star, and like Elvis, high on the charisma chart.

Their leader is none other than Colonel Parker, Elvis’s cutthroat manager, and a warrior himself, directly in contact with President Nixon, or possibly one of his doubles.

It’s an unnerving peek into a secret world, and a possible delusion. It’s what happened before Elvis, aka Sebastian Haff, found himself in an East Texas rest home, mounted on a walker, fighting an Egyptian mummy and worrying about a growth on his pecker.

Strange monsters, wild fights, sex with a beautiful ghost, a drug-induced trip into another dimension, and all manner of mayhem ensue, along with a Mississippi riverboat ride on a giant paddle wheel, and of course, there will be 3D glasses, fried peanut butter and ’nanna sandwiches, and a few hard working zombies.

Bring the kids, but plug their ears and blindfold them. This is one wild and nasty ride to the dark side, but with laughter.

Limited: 1500 signed numbered hardcover copies and sold out at the publisher

Please keep in mind, Bubba Ho-Tep was only limited to 750 copies, was signed and not numbered, so there is nothing to match here, you get a numbered Bloodsuckers and an unnumbered but smaller limitation Ho-Tep, both are signed.