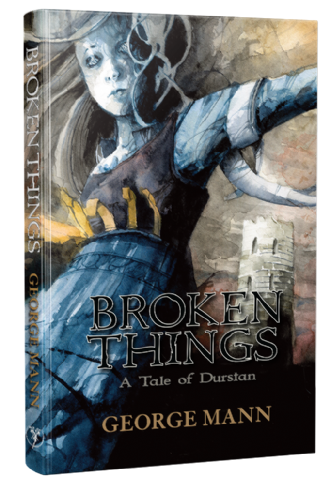 Broken Things: A Tale of Durstan

The goddess Amaranth, Queen of the Broken, has been reborn for the first time in generations and now resides once more in her distant tower, observing the world through her strange, fractured eyes. Three pilgrims set out on the trail to find her, each for their own reasons: Pallor, the Knight of Perish, who wishes to die by a worthy hand and will challenge the goddess to a fight to the death; Nok, the tribal Wolkin, who carries her brother’s bones to beg Amaranth to restore him to the afterlife; and Ambrose, the monk, charged by his Order to seek the answer to the unanswerable question at the heart of his faith. Each of these pilgrims will be tested on the road to their inevitable convergence—and each will be granted answers, of a sort, from the Broken Queen…

George Mann is a Sunday Times bestselling novelist and scriptwriter. He’s the creator of the supernatural crime series Wychwood, as well as the popular Newbury & Hobbes and Tales of the Ghost series, two of which are in development as television shows. He’s written new adventures for landmark properties such as Star Wars, Doctor Who, Sherlock Holmes, Judge Dredd, Warhammer 40,000 and Dark Souls.

George lives near Grantham with his wife, family and two noisy dogs. He loves mythology and folklore, Kate Bush and chocolate. He is constantly surrounded by tottering piles of books.