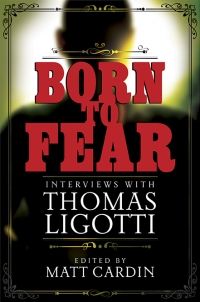 The process of interviewing varies. Most commonly it takes the form of conversations that result in off-the-cuff remarks between two or more persons. On other occasions the proceeding is more formal, with questions submitted in writing and answered in kind. The interviews in this volume belong to the latter type. Both the queries and responses were intended to result in more thoughtful and not infrequently more entertaining documents than otherwise might have resulted. This has been the case from the earliest to the most recent dialogues with Thomas Ligotti.

Considered in sequence, the interviews herein both complement and extend statements that Ligotti has offered in other formats, including essays as well as his nonfiction work The Conspiracy against the Human Race (2010). While the running themes in this volume are not unlike those proffered by most authors—including compositional practices, sources of inspiration, and biographical revelations—Ligotti  manages for the most part to reveal how idiosyncratic he is as an interview subject and as a writer of supernatural or weird horror tales. In both genres, the very title Born to Fear condenses the provenance of Ligotti’s personal experiences and insights.

Though often seen as a figure of contrived obscurity, Ligotti, in his replies to the interrogations posed proves that this accusation is far from the facts. In short, reticence is not this writer’s strong suit, especially when probed on matters that simply do not arise in more normative literary conservations. Ligotti is particularly opinionated and paradoxically droll when prompted to expound on philosophical views that to say the least are adrift from the mainstream. At the same time they are indicative of someone who has truly been born to fear, or at least deserves the benefit of the doubt on this question. Of course, readers always have the prerogative to judge for themselves.

Limited: 250 signed (by Ligotti and Cardin) numbered copies, bound in leather and sold out at the publisher