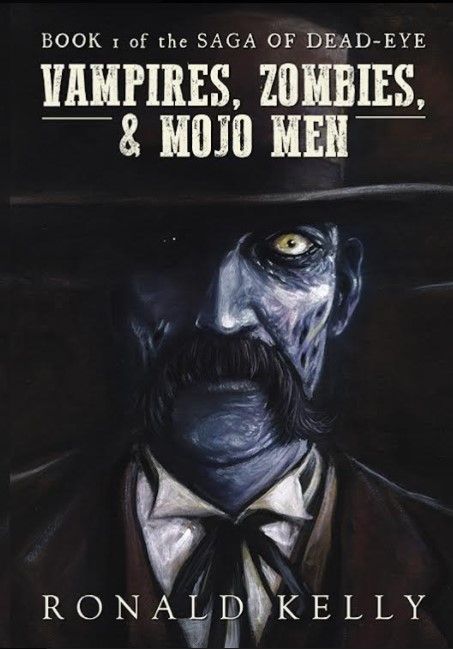 Book 1 of the Saga of Dead-Eye

The bloody War Between the States and a harrowing confinement in an
enemy prison camp had turned Joshua Wingade into a broken man. His nerves and
spirit shattered by the barbarity of battle, and demoralized by a cause that his heart
secretly despised, Wingade returns home in hope of finding peace and healing.

But, upon his arrival, he discovers that Hell had come to call. His beloved
wife had been violated and transformed into a horrid bride of the undead, and his
only son abducted by a band of diabolical outlaws led by the renegade vampire,
Jules Holland. Along for the ride are three demonic henchmen from the fetid
bowels of Hades and the dark witch, Evangeline.

Aware that he is no match for the gang, Wingade rides across Georgia and
Tennessee nonetheless, intent on rescuing his child from imminent disaster. During
his journey, he witnesses the horrors and atrocities Holland and his evil
confederates have wrought. Eventually, he finds himself at the outlaws’ mercy. An
instant before death, he makes a final pledge to his stolen son.
“I promise, Daniel! I will come for you!”

He awakens to discover that the cold finality of the grave has been thwarted.
With the help of the Louisiana mojo man, Job, he has been resurrected. But, the
frail and fearful man named Joshua Wingade is forever gone. In his place is the
stoic, steel-nerved Dead-Eye with his blind eye aglow and a gun hand as swift and
deadly as greased lightning.

Together, they vow to pursue the vampire and his minions, and deliver
young Daniel from his bondage. However, they know that time is their worst
enemy. If Holland and the others make it across the Mississippi River to the
Western territories beyond, their vengeance may never come to fruition. For they
are entering a new purgatory known as the Devil’s Playground… a vast wilderness
rife with violence and terrors unleashed from the Hole Out of Nowhere.

A place where death and evil are dealt freely, without atonement to
anyone… including God himself!

Limited to number of copies pre-ordered by October 1, 2021