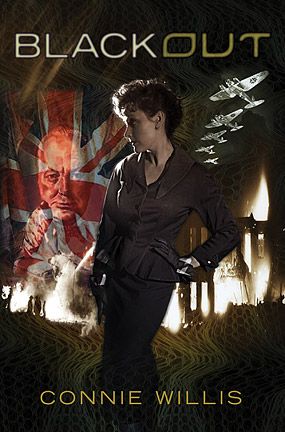 Blackout AND All Clear

Blackout is the opening movement of a vast, absorbing two-volume novel that may well prove to be Connie Willis’s masterpiece. Like her multi-award winning The Doomsday Book, this marvelous new work marries the intricate mechanics of time travel to the gritty – and dangerous – realities of actual human history.

The narrative opens in Oxford, England in 2060, where a trio of time traveling scholars prepares to depart for various corners of the Second World War. Their mission: to observe, from a “safe” vantage point, the day-to-day nature of life during a critical historical moment, As the action ranges from the evacuation of Dunkirk to the manor houses of rural England to the quotidian horrors of London during the Blitz, the objective nature of their roles gradually changes. Cut off from the safety net of the future and caught up in the “chaotic system” that is history, they are forced to participate, in unexpected ways, in the defining events of the era.

Blackout is an ingeniously constructed time travel novel and a grand entertainment. More than that, it is a moving, exquisitely detailed portrait of a world under siege, a world dominated by chaos, uncertainty, and the threat of imminent extinction. It is the rare sort of book that transcends the limits of genre, offering pleasure, insight, and illumination on virtually every page.

All Clear is the magisterial conclusion to Connie Willis’s epic, two-volume account of love, war, and time travel. Like its predecessor, Blackout, it is both a brilliantly constructed work of science fiction and a masterful recreation of a pivotal moment in 20th century history.

The story begins in the immediate aftermath of Blackout. Three time-traveling scholars, each investigating a different aspect of World War II, are stranded together in London during the height of the Blitz. Their increasingly desperate attempts to return “home” to the year 2060 form the core of a narrative that ranges freely, and with great authority, across time and space, from the evacuation of Dunkirk to the ultimate triumph of V-E Day—and beyond.

The result is a work of great ingenuity and bottomless humanity that uses chaos theory, meticulous research, and a dizzying array of temporal paradoxes to reconstruct a vanished era, illuminating that era through the varied perspectives of the soldiers, sailors, shop girls, and ambulance drivers who struggled through it. Together, Blackout and All Clear constitute a seamless, deeply moving masterpiece that will be read—and remembered—for many years to come.

and sold out at the publisher

This is a unique one of a kind set, it is not Lettered or marked PC, each book is bound as a lettered book and housed in a lettered  traycase BUT the limitation line is designated "Founder's Copy". No other sets were designated in this manner, this is your chance to own the rarest and most unique Lettered State of this set of books.