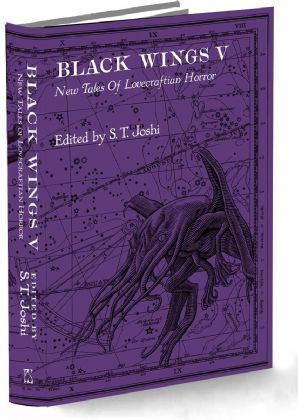 This fifth instalment of S. T. Joshi’s critically acclaimed Black Wings series features twenty stories that use H. P. Lovecraft’s mythos as the basis for imaginative ventures into the weird and terrifying. One of the central themes in Lovecraft’s work is the problematical nature of science in human affairs, and in this volume we find stories by Caitlín R. Kiernan, Lynne Jamneck, and Donald R. Burleson where scientists come face to face with the appalling implications of their discoveries.

Lovecraft was a master of the “sense of place,” inventing imaginary towns in New England with a rich and sinister history stretching back centuries. In this book, Jonathan Thomas, W. H. Pugmire, and Sunni K Brock bring Lovecraft’s towns of Arkham, Kingsport, and Innsmouth to life. Sam Gafford, Darrell Schweitzer,
and Stephen Woodworth evoke terror in other corners of the American continent, while British writers David Hambling and John Reppion find Lovecraftian horror in little-known towns in England. The world-building that led Lovecraft to fashion an entire universe set in the realm of dreams is duplicated in tales by Cody Goodfellow, Mark Howard Jones, and Donald Tyson.

Madness is always an occupational hazard of the “searchers after horror” who populate Lovecraft’s tales. In this volume, stories by Robert H. Waugh, Nicole Cushing, and Nancy Kilpatrick searingly display the psychological aberrations of characters as they encounter the bizarre. Lovecraft himself has become an iconic character, and his gaunt, lantern-jawed figure stalks the tales by Jason C. Eckhardt and Mollie L. Burleson. This volume concludes, as did its predecessor, with a long poem by Wade German, one of the most dynamic figures in a remarkable renaissance of weird poetry inspired by the work of Lovecraft and his colleagues.

Black Wings V can take its place as a pioneering anthology that shows how the work of H. P. Lovecraft is inexhaustibly rich in the inspiration it can provide to contemporary writers of weird fiction.