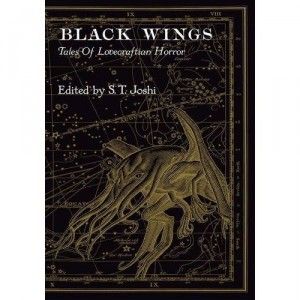 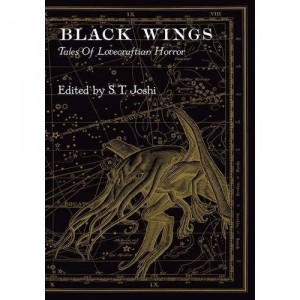 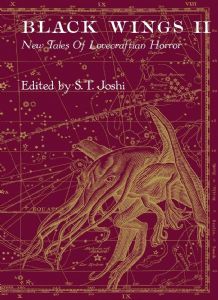 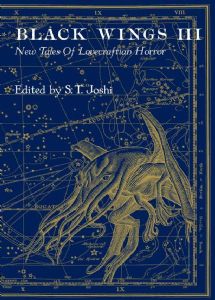 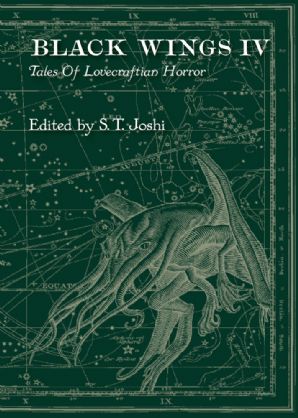 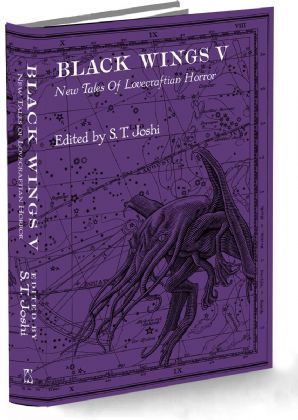 There is nothing more icky, awe-inspiring, mind-blowing or disturbing than a good Lovecraftian tale. Luckily for all of us Cthulhuheads, Black Wings, a collection of authors playing in the huge, lantern-jawed shadow cast by Uncle Howard, was headed up by S. T. Joshi, a man who has chronicled the life and works of HPL for years. If anyone knows what it takes to make a good Lovecraftian story, it’s got to be Joshi, and he proves it with this anthology of twenty-one terror tales wrapped up in a beautiful, hefty tome with Big Daddy C proudly displayed on the front.

Black Wings runs the gamut from pastiches to “sort of” sequels of some of HPL’s stories, plus tales that use the feel and flavor of Lovecraft as seasoning for their own well-cooked nightmares. Oddly enough, whatever their take, all of these stories work, something I found as a delightful surprise. Even the couple of stories that mention H. P. Lovecraft as a character who wrote his weird tales from real life, as opposed to his own creative genius, I liked quite a lot, and usually I hate such things. No matter what kind of Lovecraft fan you are, there are going to be stories in this book that speak to you.

Do you love HPL’s flesh-eating ghouls? A number of tales here pick up where “Pickman’s Model” left off, most notably Caitlin R. Kierman’s fantastic “Pickman’s Other Model (1929).”  Another story I really dug, Nicholas Royle’s “Rotterdam,” uses Lovecraft’s lesser-known “The Hound” as a jumping off point.

David J. Schow has written many stories that I’ve loved, but his is not a name I would have thought of if someone came up to me and said, “name some Mythos writers.” I’m going to have to rethink that. His “Denker’s Book” is a wonderful addition to the Lovecraft milieu, while it still sings with Schow’s very distinct voice. I adore all of Michael Shea’s Mythos tales, and his “Coping Squid” found here is no exception. Like Ramsey Campbell before him, Shea takes the Mythos out of the creepy countryside and firmly plops it down right in the middle of an urban nightmare.

Damn it all to R’lyeh, there are so many other great stories to highlight but I’m running out of space. “Lesser Demons” by Norman Partridge; Michael Marshall Smith’s “Substitutions”; “Engravings” by Joseph S. Pulver, Sr.; Jonathan Thomas’ “Tempting Providence”; and of course the always enlightening Ramsey Campbell with “The Correspondence of Cameron Thaddeus Nash.”

If you are a Lovecraft lover, a Mythos maven, or just an old Cthulhuhead like me, you’ll like each and every story found within Black Wings. I’ll even go so far as to say that you might love some. I know I did. Nine phobias.