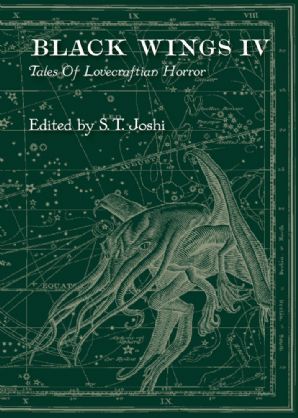 This fourth instalment of S. T. Joshi’s acclaimed Black Wings series features seventeen stories that continue to elaborate upon the conceptions, motifs, and imagery of H. P. Lovecraft, the most influential writer of weird fiction of the past hundred years. One of Lovecraft’s favourite themes was the tale of archaeological horror, where venturesome explorers unearth hideous secrets of the ancient past that cast a baleful light on the fragility of our own existence. In this volume, a major new novella by the award-winning novelist and poet Fred Chappell, “Artifact,” treats this theme with his customary panache and subtlety, while other writers such as Richard Gavin, Lois H. Gresh, Ann K. Schwader, and Donald Tyson broach the same theme in their own distinctive and diverse ways.

The cosmicism that was at the core of Lovecraft’s vision finds vivid realisation in stories by Caitlín R. Kiernan, Cody Goodfellow, and Melanie Tem. John Pelan and Stephen Mark Rainey have co-written a vivid novelette fusing horror and science fiction, while Will Murray’s tale of governmental espionage leads to a conclusion that bodes ill for the fate of the human race.

Lovecraft was skilled at evoking the terrors inherent in the history and topography of his native New England, and several writers in this volume—notably W. H. Pugmire and Jonathan Thomas—do the same. Jason V Brock finds Lovecraftian terror in Prague, just as Gary Fry locates it in the British countryside.

Lovecraft’s patented motif of the “forbidden book” that reveals secrets too horrible to contemplate is the focus of Darrell Schweitzer’s story of what can be found in an out-of-the-way bookstore, while stories by Simon Strantzas and Stephen Woodworth elaborate on the Lovecraftian themes of immortal “gods” and of dreams that reveal unwelcome truths about ourselves. The book’s final contribution, by Charles Lovecraft, is nothing less than a recasting of Lovecraft’s early tale “The Lurking Fear” in a cycle of twelve sonnets.

S. T. Joshi is the author of The Weird Tale (1990), The Modern Weird Tale (2001), and Unutterable Horror: A History of Supernatural Fiction (2012). His award-winning biography H. P. Lovecraft: A Life (1996) was later expanded as I Am Providence: The Life and Times of H. P. Lovecraft (2010). He is a two-time winner of the World Fantasy Award, and has also won the Bram Stoker Award, the British Fantasy Award, and the International Horror Guild Award.

PC - same as slipcased copy, new with number crossed out and "PC" written in

NOTE: when we got to the last PC copy of these books we noticed the back bottom corner of the slipcase was damaged, see picture, this is the last one if you want it. 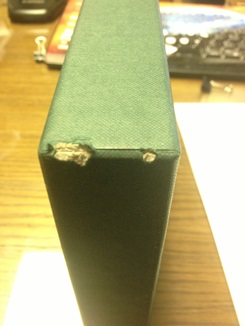