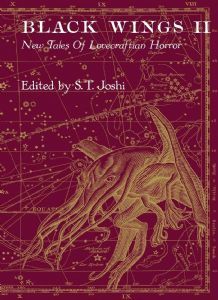 This second instalment of S. T. Joshi’s critically acclaimed Black Wings series contains eighteen stories by leading contemporary writers, all drawing upon themes, images, and ideas from the life and work of H. P. Lovecraft. Caitlín R. Kiernan has written a poetic reinterpretation of “The Hound,” while Nicholas Royle plays a fascinating riff on the existential horror of “The Outsider.” Three separate tales, by Jason C. Eckhardt, Brian Evenson, and Jonathan Thomas, ring changes on Lovecraft’s seminal story, “The Call of Cthulhu.” Nick Mamatas writes an ingenious elaboration of “The Whisperer in Darkness.”

The cosmic indifferentism that is the core of Lovecraft’s fiction is treated in various ways by John Langan, Melanie Tem, Tom Fletcher, Darrell Schweitzer, and Richard Gavin. The archaeological horror that we find in some of Lovecraft’s most powerful tales is revivified by Donald Tyson, while Lovecraft’s media presence is made the subject of half-comic, half-horrific tales by Don Webb and Chet Williamson. John Shirley, Rick Dakan, and Jason V Brock use Lovecraft’s life and outlook as springboards for imaginative tales of psychological and supernatural horror.

All in all, Black Wings II affords a rich feast of terror inspired by the twentieth century’s greatest writer of the supernatural.