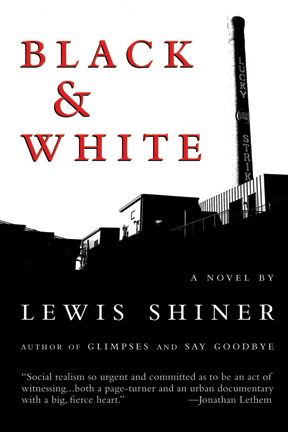 "Black & White, Lewis Shiner's long-awaited return to the novel, is social realism so urgent and committed as to be an act of witnessing. Like books by Richard Price and George Pelecanos, Shiner's is both a page-turner and an urban documentary with a big, fierce heart."
-- Jonathan Lethem

When Michael follows his dying father to North Carolina, a lifetime of lies begins to unravel. His pursuit of his father's past--haunted by voodoo, adultery and murder--takes him to a place called Hayti, once the most prosperous black community in the South. Now the mysteries of Michael's own heritage become a matter of life and death, as racial conflicts barely restrained since the 1960s erupt again.

Rooted in the true story of the US government's urban renewal policy and its disastrous aftermath, Black & White is a literary thriller, a family saga, and a searing portrait of institutionalized hatred.

"Lewis Shiner's latest, Black & White, is killer. Strong characters, suspenseful situations, and tremendous insight. A novel that doesn't flinch from social issues, and is so gracefully written it makes you want to weep. Should not be missed. Lewis Shiner is the real deal, and this is his finest work."
-- Joe R. Lansdale

Limited to 200 signed numbered hardcovers, with a chapbook of previously uncollected short stories