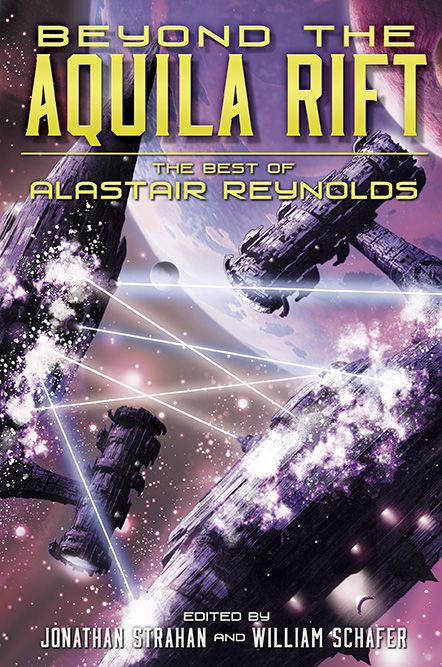 Beyond the Aquila Rift: The Best of Alastair Reynolds

The Guardian called Alastair Reynolds’ work “a turbulent, wildly entertaining ride” and The Times acclaimed him as “the mastersinger of space opera”.  With a career stretching back more than 25 years and across fourteen novels, including the classic ‘Revelation Space’ series, the bestselling ‘Poseidon’s Children’ series, Century Rain, Pushing Ice, and most recently The Medusa Chronicles (with Stephen Baxter), Reynolds has established himself as one of the best and most beloved writers of hard science fiction and space opera working today.

A brilliant novelist, he has also been recognized as one of our best writers of short fiction.  His short stories have been nominated for the Hugo, British Fantasy, British Science Fiction, Theodore Sturgeon Memorial, Locus, Italia, Seiun, and Sidewise Awards, and have won the Seiun and Sidewise Awards.

The very best of his more than sixty published short stories are gathered in Beyond the Aquila Rift: The Best of Alastair Reynolds, a sweeping 250,000 word career retrospective which features the very best stories from the ‘Revelation Space’ universe like “Galactic North”, “Great Wall of Mars”, “Weather”, “Diamond Dogs”, and “The Last Log of the Lachrymosa” alongside thrilling hard science fiction stories like Hugo Award nominee “Troika”, “Thousandth Night”, and “The Star Surgeon’s Apprentice”. Spanning more than fifteen years, the book also collects more recent stories like environmental SF tale “The Water Thief”, powerful and moving YA “The Old Man and the Martian Sea” and the brilliant “In Babelsberg”.

Beyond the Aquila Rift: The Best of Alastair Reynolds has something for every reader of science fiction, and easily meets the challenge of delivering stories that are the hardest of hard science fiction and great entertainment.

Limited: 350 signed numbered copies, in slipcase, with an exclusive dust jacket by the author -

Lettered:  26 signed copies, bound in leather, housed in a custom traycase and sold out at the publisher.