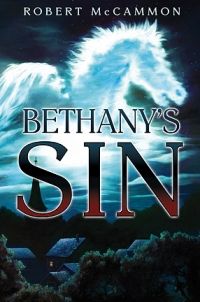 Bethany’s Sin is a tiny, picturesque village in rural Pennsylvania. Its tree-lined streets, beautiful houses, and manicured exteriors offer—or appear to offer—both peace and a place of refuge. Evan Reid, a man haunted by his memories of the Vietnam War and by a history of viscerally disturbing dreams, comes to the village with his wife and daughter, hoping to make a fresh start after a series of discouraging setbacks. At first, all goes as planned. Evan resumes his career as a freelance writer while his wife, Kay, begins teaching math at a local college. But there are things going on in Bethany’s Sin that no one wants to talk about: unexplained disappearances, houses that stand strangely vacant, half glimpsed figures that appear to be female, the impossible sound of hoof beats in the night. At the center of it all stands a single imposing woman: Dr. Kathryn Drago, a scholar and community leader who holds the key to the mysteries that enshroud the town.

First published as a paperback original in 1980, Bethany’s Sin was Robert R. McCammon’s second novel. Like its predecessor, Baal, it offers a frightening, thoroughly imagined portrait of ancient forces set loose in the modern world. Like Baal, it is both a notable accomplishment in its own right and an invaluable glimpse into the formative years of a major writer, a man whose raw narrative talent was apparent from the start.

This deluxe new edition offers McCammon’s many fans the definitive version of a significant early work, a book that foreshadows the later—and larger—accomplishments to come.

A "PC" copy is identical in every way to a lettered copy but has the letters "PC" in the limitation line, the "PC" denotes "Publisher's Copy" and is one of a very few copies produced for use by the Publisher, usually for contributors.