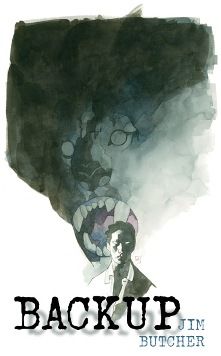 Let's get something clear right up front.

Harry's a wizard. A genuine, honest-to-goodness wizard. He's Gandalf on crack and an IV of Red Bull, with a big leather coat and a .44 revolver in his pocket. He'll spit in the eye of gods and demons alike if he thinks it needs to be done, and to hell with the consequences--and yet somehow my little brother manages to remain a decent human being.

I'll be damned if I know how.

But then, I'll be damned regardless.

My name is Thomas Raith, and I'm a monster.

So begins "Backup" a twelve thousand word novelette set in Jim Butcher's ultra-popular Dresden Files series. This time Harry's in trouble he knows nothing about, and it's up to his big brother Thomas to track him down and solve those little life-threatening difficulties without his little brother even noticing.

Trade: full cloth bound hardcover copies and sold out at the publisher

Limited to 500 signed numbered copies, bound in leather, and sold out pre-publication