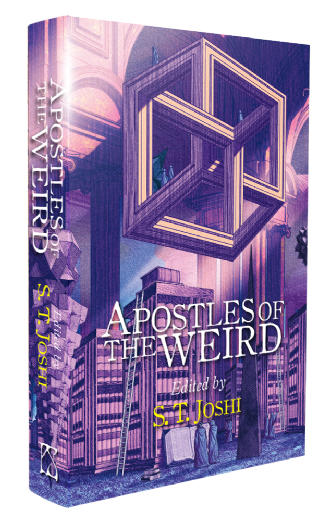 Apostles of the Weird

Weird fiction is an incredibly rich and varied genre, running the gamut from supernatural horror to imaginary-world fantasy to psychological terror. This anthology seeks to exhibit the wide range of themes, motifs, and imagery that weird fiction allows, as embodied in the work of some of the leading contemporary writers in the field.

The ghost or revenant is a venerable motif, and stories by John Shirley, Lynda E. Rucker, and Reggie Oliver bring fascinating changes on it. Allied to the ghost is the haunted house, and stories by Gemma Files and Jason V Brock present highly ingenious variants on the idea. The resurrection of the dead is treated in strikingly different ways by Clint Smith, Jonathan Thomas, Michael Aronovitz, and W. H. Pugmire.

Weird fiction has always exploited topographically remote areas of the world as a potent setting for horror. Here, tales by Cody Goodfellow, Lynne Jamneck, and Stephen Woodworth take us to unfamiliar realms where the weird can manifest itself. From a very different perspective, Richard Gavin and Darrell Schweitzer infuse their tales with elements of fantasy that allow for the maximum play of the imagination.

Science fiction has always been allied to the weird, and in this volume Nancy Kilpatrick and George Edwards Murray take us to a post-apocalyptic environment where the preservation of our very humanity is brought into question. Psychological horror, as represented here by the work of Steve Rasnic Tem and Michael Washburn, focuses on the dread that stems from mental aberration.

The eighteen stories making up Apostles of the Weird demonstrate that weird fiction is a multifaceted genre whose emphasis on fear does not preclude pathos, poignancy, and a brooding rumination on our place in this fragile world.

Limited to 100 copies signed by the contributors