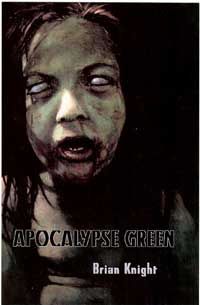 Bloodletting Press is announcing the first title in their all new Novelette Series called APOCALYPSE GREEN by Brian Knight.

KG 200 was a secret, specialized branch of the German Luftwaffe formed before World War 2 for espionage and recognizance. Though most of the documents detailing their most secret missions were destroyed before allied powers could seize them, some did survive.

One of these missions, code named Apocalypse, was the first known attempt at advanced biological warfare on humans. Though the records of Apocalypse are incomplete, the evidence confirms the horrific effects that Apocalypse had on one small farming village in Poland.

Only now, decades later, is the evidence being released to the public.

Please note that this is for a stand alone unmatched copy

Lettered limited to 52 signed, lettered and slipcased hardcover copies and sold out at the publisher

Matching numbered set of the softcover state of the novelettes published by Bloodletting Press as follows: