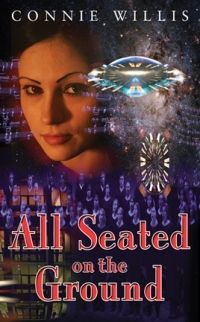 All Seated On the Ground

The aliens have landed! The aliens have landed! But instead of shooting death rays, taking over the planet and carrying off Earthwomen, they've just been standing there for months on end, glaring like a disapproving relative. And now it's nearly Christmas, and the commission assigned to establish communications is at their wits' end. They've resorted to taking the aliens to Broncos games, lighting displays, and shopping malls, in the hope they'll respond to something!

And they do, but in a way nobody ever expected, and Meg, the commission, and an overworked choir director find themselves suddenly caught up in an intergalactic mess involving Christmas carols, scented candles, seventh-grade girls, Alvin and the Chipmunks, Meg's Aunt Judith, Victoria's Secret, and Handel's Messiah.

Multiple Nebula and Hugo Award-winning author Connie Willis may be most famous for her books To Say Nothing of the Dog, Doomsday Book, Inside Job, D.A., and The Winds of Marble Arch and Other Stories, but she's also a huge fan of the holidays and their accompanying frivolity and nonsense, and has written a marvelous array of Christmas stories, including Miracle and Other Christmas Stories, "Just Like the Ones We Used to Know" (made into the CBS movie Snow Wonder), "deck.halls@boughs/holly", and now the hilarious "All Seated on the Ground."