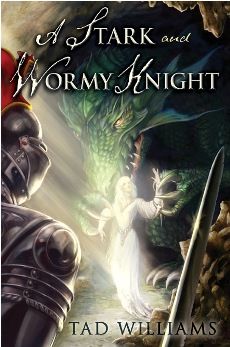 A Stark and Wormy Knight

Tad Williams is an acknowledged master of the multi-volume epic. Through such popular series as Memory, Sorrow, and Thorn and Otherland, he has acquired a huge and devoted body of readers who eagerly await each new publication. A Stark and Wormy Knight offers those readers something both special and surprising: a virtuoso demonstration of Williams’s mastery of a variety of shorter forms.

The range of tone, theme, style, and content reflected in this generous volume is nothing short of amazing. The title story is a tale within a tale of dragons and knights and is notable for its wit and verbal inventiveness. “The Storm Door” uses The Tibetan Book of the Dead to forge a singular new approach to the traditional zombie story. “The Terrible Conflagration at the Quiller’s Mint” offers a brief, independent glimpse into the background of Williams’s Shadowmarch series. “Ants” provides an ironic account of what can happen when a marriage goes irrevocably wrong.

Two of the longer entries show Williams working, with great facility, within the fictional creations of other writers. “The Thursday Men” is a hugely entertaining foray into the world of Mike Mignolla’s Hellboy comics. The wonderfully titled “The Lamentably Comical Tragedy (or the Laughably Tragic Comedy) of Lixal Laqavee” is both a first-rate fantasy and a deeply felt homage to Jack Vance’s immortal Dying Earth. Two other pieces offer rare and hard-to-find glimpses into other facets of Williams’s talent. “Bad Guy Factory” is the script for a proposed series of DC Comics that never came to fruition. “Black Sunshine” is the immensely readable screenplay for a movie that remains, at least for the moment, unproduced. One can only hope.

These and other stories and novellas comprise a stellar collection that really does contain something for everyone. For longtime Williams readers, and for anyone with a taste for literate imaginative fiction, A Stark and Wormy Knight is a welcome—and indispensable—volume.

Limited to 250 signed and numbered copies, bound in leather