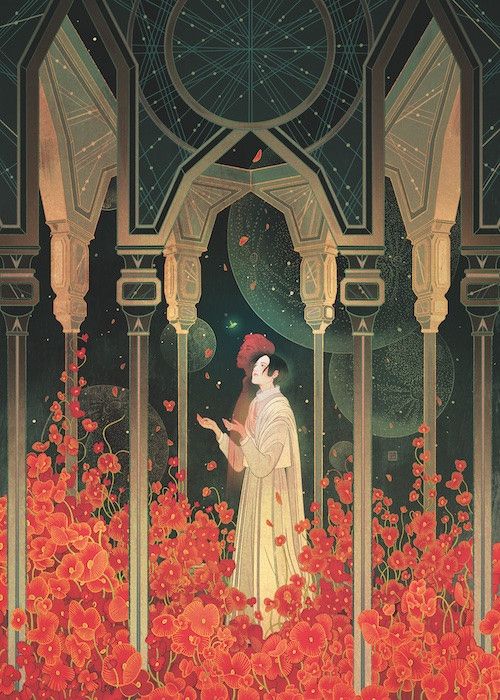 Subterranean Press is pleased to present A Memory Called Empire, the Hugo award-winning debut novel by Arkady Martine in an oversized, signed limited edition, printed in two colors throughout, with a full-color dust jacket, end papers, and chapter head illustration by Victo Ngai.

The Teixcalaanli Empire has a long reach, the various facets of its culture spread across planetary systems. The crown jewel is The City, the planet-sized heart of it all. There are free peoples, like that of Mahit Dzmare, who lives on the independent mining station Lsel outside the empire’s direct control. But, even so, an ambassador must be present in the City to maintain relations.

When a call for a new ambassador comes in suddenly, Mahit is detailed to the position and tasked with discovering what has happened. Embedded with a device called an imago that holds the previous ambassador Yskander’s memories and is meant to allow him to advise her, it turns out his memory self is outdated and soon goes silent. Moreover, Yskander has been brutally murdered. Mahit soon finds herself embroiled in political intrigue that could end with her home annexed and way of life ended...unless she can stop it.

Arkady Martine’s Hugo-winning space opera A Memory Called Empire—deemed “a mesmerizing debut, sharp as a knife” by the New York Times—introduced readers to a bold new voice in science fiction and began a thrilling epic adventure unlike any they’ve read before.