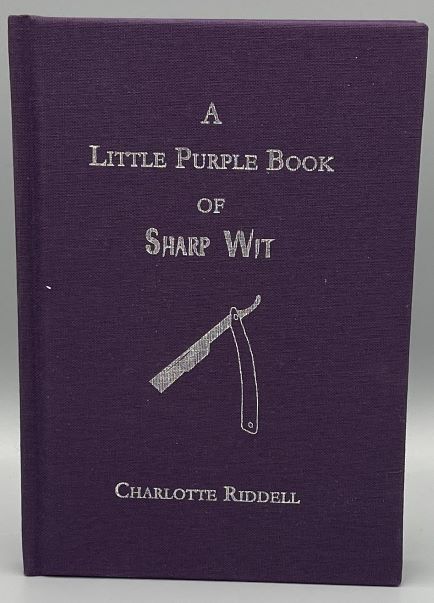 The 5th volume of “Little Books” Series IV  — Past Masters of Horror and Dark Fantasy.

The white space in her pages is also due, in part, to the second thing I love: her dialogue. Witty and engaging, fun and realistic, the dialogue jumps off the page. And Riddell used it perfectly: to advance the story and to reveal the nature of her characters without long, boring info dumps.

Riddell did not reserve the wit for the dialogue, either. Many of her stories are full of subtle and not-so-subtle sarcasm. Sometimes it caught me completely off guard, making me laugh out loud.

Fairly or not, I often generalize Victorian writers as overly wordy and bleak. Riddell’s writing is neither of those things. I was pleasantly surprised by her work and would not hesitate to recommend it to anyone.

Charlotte Riddell (nee Charlotte Eliza Cowan) was born on September 30, 1832 in Carrickfergus, County Antrim, Ireland. Her father was the High Sheriff for County Antrim. When he died, Charlotte was about 19, and four years later, she and her mother moved to London.

In order to make ends meet, Charlotte wrote. She wrote a lot. And she wrote under multiple pseudonyms, including R.V. Sparling, Rainey Hawthorne, and F.G. Trafford. In 1857 she married Joseph Hadley Riddell, a civil engineer with a poor head for business, who had incurred many debts. (Debts she continued to pay even after his death.) She wrote to support them, eventually using her married name, Mrs. J. H. Riddell.

During her lifetime, she penned over 50 novels, novellas, and short stories. She was the part-owner and editor of St. James Magazine, a literary journal created by Anna Maria Hall. She also edited Home and wrote for the Society for the Promotion of Christian Knowledge and Routledge’s Christmas annuals.

Having earned the nickname “Novelist of the City,” Charlotte Riddell was praised by the likes of M. R. James and was the first writer to receive a pension from the Society of Authors.