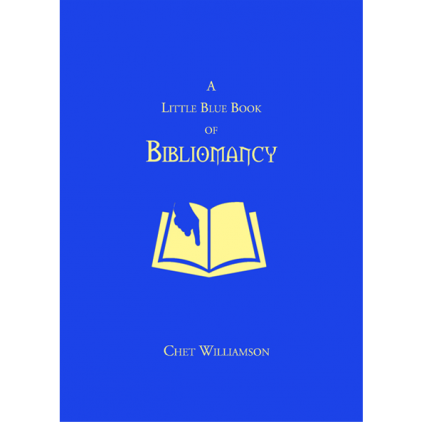 A Little Blue Book of Bibliomancy

Though primarily a writer of very accomplished fiction, Chet Williamson has also written non-fiction books, essays, plays, reviews, songs, and letters of complaint. What you’ll find in these pages is a grab-bag of his work that is largely unseen by his usual audience.

There is one piece of fiction: “Returns.” And it is new to all but two readers.

About ten years ago, Williamson began a secondary career as a playwright, having had a few produced—the most recent of which was He Comes For His Books, a roman a clef about Harold Pinter and first wife Vivien Merchant.

There are two plays in his Little Blue Book—one a dramatic adaptation of one of his short stories, and the other of a novella. In the case of the novella, The Story of Noichi the Blind, Booklist said, “This extraordinary performance makes such comparably transgressive writing as the Marquis de Sade’s seem totally crude.”

The remaining pages contain reviews, tributes to four writers, and a handful of essays and blogs.

A Little Blue Book of Bibliomancy promises to give readers new insights into one of our favorite writers.