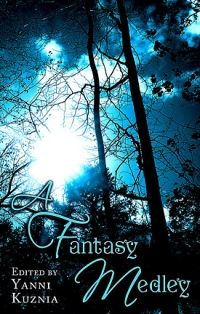 In “Zen and the Art of Vampirism,” Zoe Takano, the only vampire in Toronto, a city filled with supernatural creatures of Kelley Armstrong’s Otherworld, finds her place in the hierarchy threatened by two interlopers.

“Riding the Shore of the River of Death” returns us to the world of Kate Elliott’s Crown of Stars. Kareka, daughter of the begh of the Kirshat, hunts to take a man’s head. It is her last opportunity to prove herself as a man or else she will find herself restricted to the role of woman and wife in the clan forever.

Robin Hobb revisits her Farseer world in “Words Like Coins.” Mirrifen, a failed hedge-witch’s apprentice who has married to find security finds that threatened by a severe drought and the appearance of a pregnant female pecksie.

C.E. Murphy takes us to frozen Moscow in “From Russia, with Love.” Baba Yaga’s daughter is a barmaid at a dive when Janx and Eliseo Daisani walk in. They discover, as they compete for the girl’s affections, that Baba Yaga has plans for Janx and that her beautiful daughter had merely been the bait.