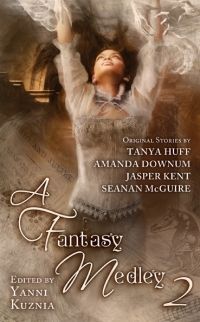 In A Fantasy Medley, editor Yanni Kuznia assembled a diverse quartet of stories from some of fantasy’s most exciting authors, and the sell-out volume earned a starred review from Publishers Weekly. Now Kuznia returns with A Fantasy Medley 2, offering absorbing new tales of the fantastic from four of the brightest stars in the field:

With “Quartered,” Tanya Huff returns to the world of her beloved Quarters series with the story of the young bard Evicka, whose mission to spy on an assassin brings peril, tragedy, and, ultimately, revelation.

In “Bone Garden,” Amanda Downum revisits Erisín, setting of her critically lauded novel The Bone Palace from the Necromancer Chronicles. Deadly spirits are preying on the city’s most vulnerable citizens in this story of secrets and sacrifice.

“The Sergeant and the General” finds Jasper Kent weaving a tale from the other side of the battle lines drawn in his Danilov Quintet, with a French veteran of Napoleon's disastrous Russian campaign haunted by more than just memories.

And in “Rat-Catcher,” Seanan McGuire travels into the past of the October Daye series to pull back the veils on both the world of 17th century London theater and the faerie Court of Cats as two worlds collide in one of the greatest conflagrations in history.

Limited to 224 numbered copies signed by the authors and editor