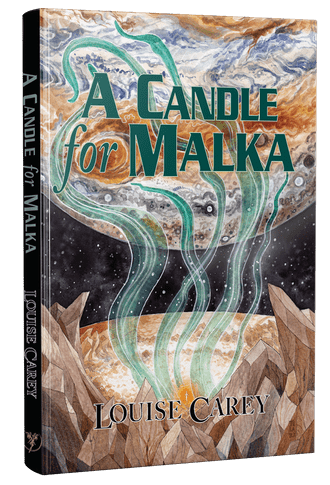 A Candle For Malka

A Candle For Malka is a bit of a hybrid beast; part cosmic horror, part science fiction… and all heart, dealing with a future where the Earth’s natural resources have been depleted and—not content with destroying our own planet—big business is now expanding its search for oil further out into the solar system. The story is told from the viewpoints of a brother and sister, Malka and Bram Schulman, as each seek to navigate the results of one such expedition, to Europa. Except this story is so much more than that. It’s a story about family, faith, strength, greed and where it takes us...A Candle for Malka is a novella to be proud of.

BIO
Louise Carey is a science-fiction and fantasy author. Her debut solo novel, Inscape, came out in 2021 from Gollancz. Described by SFX magazine as ‘a propulsive thriller...with great twists and reversals’, it has been nominated for an SCKA award and is the first in a trilogy of cyberpunk thrillers. The sequel, Outcast, is out now. Louise has also co-written two fantasy novels, The City of Silk and Steel and The House of War and Witness (Gollancz), and a graphic novel, Confessions of a Blabber-mouth (DC Comics). She has a short story forthcoming in the Night, Rain, and Neon anthology from NewCon Press. When she’s not writing, Louise can usually be found playing board games, reading, or DMing for a group of rowdy but well-intentioned adventurers. She’s repped by Meg Davis of Ki Agency.