Hill House Publishers & Cemetery Dance Publications are proud to bring you the publication of the greatest original horror anthology since Dark Forces...

999 is a massive original anthology containing over a quarter-of-a-million words of completely new fiction. In 999, the world's best writers of horror and suspense have created a literary landmark that defines the field at the close of the 20th century!

The limited editions will be a completely unique and elegant design. They are being designed by Marysarah Quinn, the designer of Stephen King's The Stand: The Complete and Uncut Edition.

Limited to 500 copies in a fine leather binding and handsome slipcase (black)
NOTE: This is a PC copy of the limited state that has been signed by all except Stephen King adn Joyce Carol Oates

Lettered copy, actual lettered copy, as new in traycase (maroon), limited to 52 copies signed by all, except Stephen King and Joyce Carol Oates 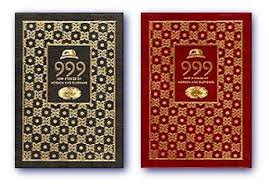 NOTE: Stephen King and Joyce Carol Oates did not orignally sign any of these books, any copies with their signatures that may exist, the signatures were obtained afterword publication and did not come from the publisher with same.