A Journey of Decadence and Debauchery

Originally Published by, and available from Necro Publications in a trade paperback

The story behind the hardcover state of INTO PAINFREAK:

One afternoon while drinking beer, eating Cuban Sandwiches, stuffed potatoes and devil crabs, and just having a good time, a group of authors inquired as to how to make a nice hardcover edition of a paperback book.  Lucky for them the meeting was at our home and Kim and I, always wanting to produce nice books, struck a deal with the authors and publisher, what came out of it was the following: 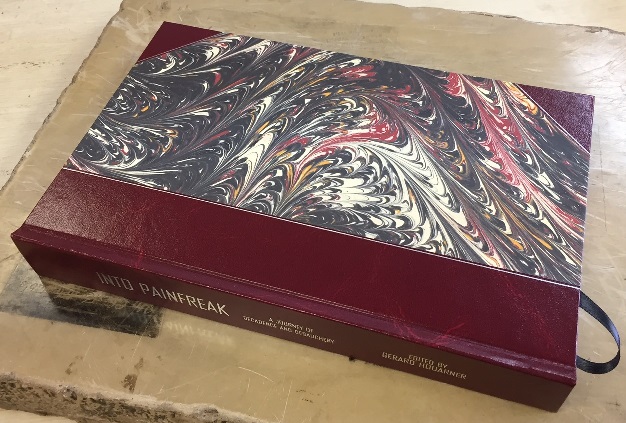 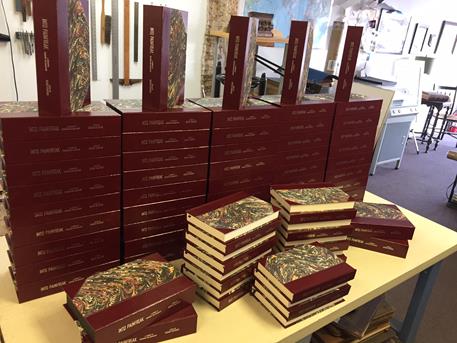 The project started with signature sheets, each contributor signed a single sheet which was hand tipped in front of their story, our binder was not happy, there being 80 sets of sheets, each set containing 22 pages (a couple of contributors had to sign twice for two different contributions).  While they were out for signature we had to get sewn page blocks from the publisher, we ordered 80, they sent 115, but that story will come later.  Once we had the signature sheets and page blocks in hand we loaded them up and went to our binder, a true artist and like most artists, not the quickest in the world, but well worth the wait.  Here is what we ended up with.

Lettered Copies 54, 52 lettered A to ZZ and two PC’s one for the Editor and one for the publisher (Dave Barnett) The lettered state is half bound in Blood Red Spania with French Marbled Paper over boards, ribbon marker, with matching traycase.  These will be $225.00 each

Author Copies, designated as such and totaling 20, these are bound exactly like the lettered except that        they do not come with the traycase.  They were not sold but given to each contributor.

If you are paying attention you will notice that the numbers do not add up, and you are right, there are 6 sets of signature sheets not accounted for, and there was supposed to be six sets of sewn pages left to go with the signature sheets.  Unfortunately when all was said and done we were short two sets of sewn pages from the printer, and one was damaged, leaving only three.   These six sets, which are now only three, will ultimately be made into an Ultra Deluxe Traycase Edition, the particulars have not been determined yet and it may be six months to a year before they are done, but here is where we are with them. 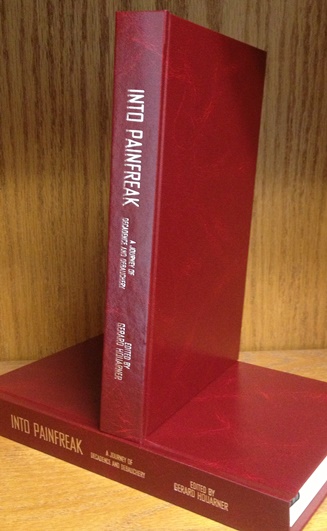 Finally, the 35 extra page blocks…we could not see simply throwing them away, so we had them bound in the same material the other states were
half bound in and contain a ribbon marker.  Not wanting to dilute the value of the lettereds by simply selling them, we are offering them to the contributors, limit one per contributor, or to anyone that buys a lettered copy, first come, first serve at an additional $75.00, they will be lettered to match the accompanying lettered book, but be stamped, “Reading Copy/Lettered.”  or the ones purchased by the contributors will be stamped, “Author’s Copy/Reading Copy.”

And that’s our story and we’re sticking to it!