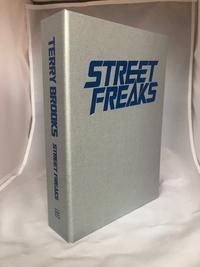 We do not as a general rule carry books published by Grim Oak Press.  There is nothing wrong with them, it is just when they started out they did not want to set us up as a dealer.  As such, we have no idea how they handle rights to forthcoming books!  These books are all consignment titles, they are all as new, they are all lettered copies of the respective title, and they do not come with any rights that we are aware of, you will need to reach out to Grim Oak Press to determine that.

It has been forty years since Terry Brooks changed the fantasy publishing landscape with the publication of The Sword of Shannara. Now he turns his hand to science fiction with his long-awaited Street Freaks.

Street Freaks is the future of the United States that no longer exists in its present form. At its epicenter is Ash Collins, a boy whose comfortable life is turned upside down in minutes, forcing him to flee for his life. In saving himself, he discovers the world of the Red Zone, a forbidden part of the city to which his father has sent him. There he encounters very different kinds of people, most of whom are considered discards and street trash. For in this future, genetics and robotics have changed everything, and even the question of who is human and who is not is open to interpretation.

A world of throw-back street racing, of the ‘tweeners and ‘bots which comprise much of the population, of corporations and government entities intent on crushing dissent, and of a girl unlike anyone Ash has ever met, find him struggling to stay one step of ahead of those who would hunt him down and terminate him.  But there is more at stake than his life.  The whole world is threatened by those who search for him.  And for reasons he can only guess at, he seems to be the only one who can save it.

In this dark and gritty collection—featuring short stories from Jim Butcher, Seanan McGuire, Kevin J. Anderson, and Rob Thurman—nothing is as simple as black and white, light and dark, good and evil..

Unfortunately, that’s exactly what makes it so easy to cross the line.

In #1 New York Times bestselling author Jim Butcher’s Cold Case, Molly Carpenter—Harry Dresden’s apprentice-turned-Winter Lady—must collect a tribute from a remote Fae colony and discovers that even if you’re a good girl, sometimes you have to be bad...

New York Times bestselling author Seanan McGuire’s Sleepover finds half-succubus Elsie Harrington kidnapped by a group of desperate teenage boys. Not for anything “weird.” They just need her to rescue a little girl from the boogeyman. No biggie.

In New York Times bestselling Kevin J. Anderson’s Eye of Newt, Zombie P.I. Dan Shamble’s latest client is a panicky lizard missing an eye who thinks someone wants him dead. But the truth is that someone only wants him for a very special dinner...

He called himself Thomas Covenant the Unbeliever, because he dared not believe in this strange alternate world on which he suddenly found himself.

Yet the Land tempted him. He had been sick; now he seemed better than ever before. Through no fault of his own, he had been outcast, unclean, a pariah. Now he was regarded as a reincarnation of the Land's greatest hero—Berek Halfhand—armed with the mystic power of White Gold. That power alone could protect the Lords of the Land from the ancient evil of the Despiser, Lord Foul. Except that Covenant had no idea how to use that power. . . .

Book II of The Chronicles of Thomas Convenant, Unbeliever
After scant days in his “real” world, Thomas Covenant finds himself again summoned to the Land. There, forty bitter years have passed, while Lord Foul, immortal enemy of the Land, moves to fulfill his prophecy of doom.

Spinning Silver
With the Nebula Award–winning Uprooted, Naomi Novik opened a brilliant new chapter in an already acclaimed career, delving into the magic of fairy tales to craft a love story that was both timeless and utterly of the now. Spinning Silver draws readers deeper into this glittering realm of fantasy, where the boundary between wonder and terror is thinner than a breath, and safety can be stolen as quickly as a kiss.

Miryem is the daughter and granddaughter of moneylenders, but her father’s inability to collect his debts has left his family on the edge of poverty—until Miryem takes matters into her own hands. Hardening her heart, the young woman sets out to claim what is owed and soon gains a reputation for being able to turn silver into gold. When an ill-advised boast draws the attention of the king of the Staryk—grim fey creatures who seem more ice than flesh—Miryem’s fate, and that of two kingdoms, will be forever altered. She will face an impossible challenge and, along with two unlikely allies, uncover a secret that threatens to consume the lands of humans and Staryk alike.
Uprooted

“Our Dragon doesn’t eat the girls he takes, no matter what stories they tell outside our valley. We hear them sometimes, from travelers passing through. They talk as though we were doing human sacrifice, and he were a real dragon. Of course that’s not true: he may be a wizard and immortal, but he’s still a man, and our fathers would band together and kill him if he wanted to eat one of us every ten years. He protects us against the Wood, and we’re grateful, but not that grateful.”

Agnieszka loves her valley home, her quiet village, the forests and the bright shining river. But the corrupted Wood stands on the border, full of malevolent power, and its shadow lies over her life.

Her people rely on the cold, driven wizard known only as the Dragon to keep its powers at bay. But he demands a terrible price for his help: one young woman handed over to serve him for ten years, a fate almost as terrible as falling to the Wood.

The next choosing is fast approaching, and Agnieszka is afraid. She knows—everyone knows—that the Dragon will take Kasia: beautiful, graceful, brave Kasia, all the things Agnieszka isn’t, and her dearest friend in the world. And there is no way to save her.