One day, horror hack Toby Chalmers looks up from his laptop, and sights a drooling home invader in his study. Decked out in high-tech security gear, the trespasser squirts leg-paralyzing, voice-stealing nanomist into the author's mouth, and coerces him into composing an alleged masterpiece:

Tragedy strikes Cosplay Con, scorching Jordan's girlfriend down to a charcoal skeleton...save for one small bit of anatomy.

To unravel the musky mystery of a flying, street fighting sex organ, Jordan must pay a visit to Dr. Arnie Shrem, a.k.a. The Muff Whisperer.

Between each completed chapter of their work in progress, the intruder regales Toby with details of their next collaborations, “excellent ideas” involving superpowered penis transplants and anthropomorphic, extraterrestrial, lesbian bulldogs. Simultaneously, the cretin is mutating into an animal-vegetable hybrid.

Norville Blott, Immunoblot Books’ owner/editor/sole employee, thrives as a small press humbug. Paying his authors little to no royalties, tricking them into signing away their film, hardcover, and audiobook rights (though Immunoblot Books produces no such things), and even stiffing them on the free author copies specified by their contracts, he keeps his morbidly obese wife and himself fed and housed. He is as content as he can be, he believes, until a certain manuscript reaches his inbox.

Toby Chalmers, the author of books such as The Muff Whisperer and The Indelible Adventures of Sergeant Thundershorts, has typed up a new “masterpiece”: Marty McManus, the Scourge of the Morgue. A coming of age tale examining a gourmand of corpse flatulence, the novel triggers Norville in ways that Norville never knew he could be triggered. Deciding that its author must die for that transgression, he embarks on an interstate drive to pay him a surprise visit.

Little does Norville know, however, that Toby Chalmers has a knack for attracting home invaders. The P’thorkians (alleged extraterrestrials desperate for a creative communion) have attained a pair of  Chalmers' manuscripts, and now plan to abduct him. 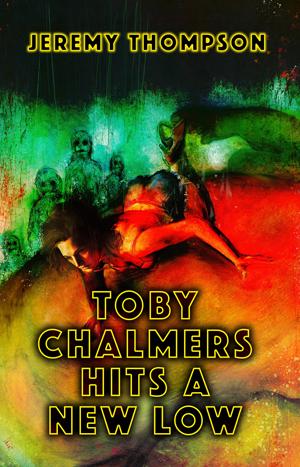 Matching Lettered Set: Both titles are limited to 26 signed and lettered copies and both are sold out at the publisher