The Best Short Fiction of Darrell Schweitzer Volumes I and II

Volume I - The Mysteries of the Faceless King

Darrell Schweitzer’s career stretches back to the early 1970s. He has written novels, most notably The Mask of the Sorcerer (1995), which was expanded from a World Fantasy Award finalist novella, but he has probably most distinguished himself for a steady stream of short fiction which caused anthologist Mike Ashley (in The Mammoth Book of Sorcerers’ Tales) to call him “today’s supreme stylist” in the fantasy field. His work has appeared in a great variety of publications ranging from Amazing Stories and Rod Serling’s The Twilight Zone magazine to Interzone and numerous PS Publishing anthologies. The present volume is the first major retrospective of his work.

“Once upon a time . . .   None of the stories collected herein begin with those words, though some come close. But they might as well. For Darrell Schweitzer writes a very traditional sort of story. His fiction is almost always fantasy, which is a mode nested deep in the roots of Story, usually horror, a mode as old as nightmares, and very often weird fantasy, a much more recent mode but one that is dear to his heart. Most could have been written a hundred years ago—or, with equal ease, a hundred years in the future. This is not a criticism. Timelessness is precisely what he is after. 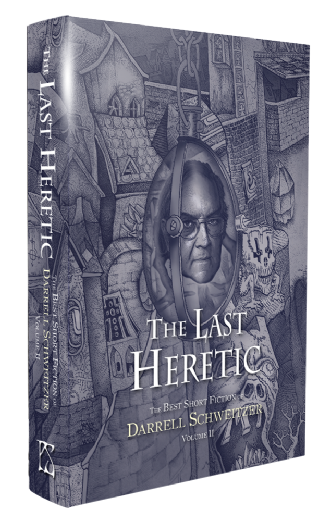 “A long-deserved tribute to his copious and entertaining career as a storyteller,” is how Paul Di Filippo describes this second volume of our Darrell Schweitzer retrospective in his introduction. “We might first make the observation that Darrell hews to time-tested narrative strategies:  classical, demonstrably effective modes of story-telling learned at the feet of the masters. . . This straight-line approach does not rule out suspense, trickery, or depth of portraiture.  Quite to the contrary, this reliance on immemorial methods of storytelling allow his work to hit home all the more impactfully.  Take a story like ‘The Dead Kid,’ which always lays all of its cards on the table in plain sight, Stephen-King-style, but which is nonetheless full of twists and punchy horror. . . . In ‘The Fire Eggs,’ we see an alien manifestation that greatly perturbs civilization, along the lines of a Ted Chiang piece.  In "Spiderwebs in the Dark" we get a mind-blowing look at the hidden underpinnings of the spacetime continuum.”

Indeed here we see Schweitzer display the fullest range of his talents, from the supernatural to science fiction to wry wit (the hilarious “Kvetchula”) to what can only be described as post-modern existential weirdness in “Ring the Living Bells,” which Di Filippo compares to Robert Aickman. We also get sophisticated neo-pulp (“Waiting for the Zeppelin Gang”), theological alternate history (“The Last Heretic”), Arthurian romance, Lovecraftian horror, and some truly unique material. “The Adventure of the Hanoverian Vampires” is not only a Sherlock Holmes pastiche, but the only alternate historical vampire cat detective story ever written. Whatever his fictional mode, Darrell Schweitzer is a vastly entertaining writer.