The Disciples of Apollo Eric Brown

THE DISCIPLES OF APOLLO collects Eric Brown’s finest short fiction, from the contemporary title story, in which the victims of a terrible malaise retreat to a sequestered island to see out their final months, to the far future of Dark Calvary, set on the dying world of Tartarus Major whose sun is about to go nova. Whether set is space of the future, or Earth of the here and now, Brown’s stories are imbued with a passionate concern for the human condition and the need to deliver compelling narratives. ‘The Children of Winter’ and ‘Hunting the Slarque’ won the BSFA Award for the best short story of 1999 and 2001 respectively, while ‘Zarla’s World” is original to the collection. 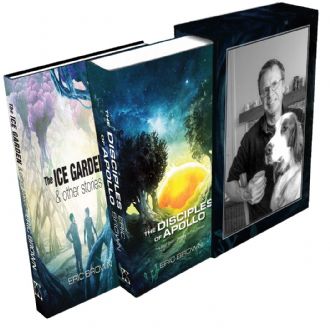