In the 1950s, Kate Wilhelm began publishing science fiction after she read a story in a magazine and said, “I can do better than that.” She quickly proved that she could do better, selling “The Mile-Long Spaceship” to John W. Campbell at Astounding. “You have an easy, pleasing and readable style, one that would, moreover, be a marked change in science fiction,” John W. Campbell wrote to her in 1957. Soon she was invited to attend a Milford writers conference in Pennsylvania and there she met Damon Knight, whom she eventually married.

Working with Knight as he edited his Orbit anthology series, Kate Wilhelm came into her own as a writer, publishing stories that grounded their extrapolations in strong naturalistic depictions of the here-and-now. In tales such as “Ladies and Gentlemen, This Is Your Crisis” and “Baby, You Were Great,” she demonstrated her facility with speculation and science-fictional ideas, while tales like “The Village” and “The Funeral” spoke with great relevance to social and political matters. She received a Nebula Award in 1969 for “The Planners,” one of her many well-crafted stories of scientific inquiry.

Kate Wilhelm once said she didn’t set out to cross genre lines with her fiction, she just had a blind spot when it came to genre boundaries. Consequently, her stories often blend elements of mystery, crime, and the supernatural with the scientific rigor of science fiction, and readers never know what to expect when they start to read stories like “The Gorgon Field” or “The Day of the Sharks” or “The Look Alike.” There’s no telling where these characters will take you.

Many of Kate Wilhelm’s classics tell the tale of a young woman drawn into a web of scientific intrigue, and here you’ll find “The Winter Beach,” “The Fullness of Time,” and “The Bird Cage,” prime examples of this storytelling mode.

The depth of characterization and the psychological insight in stories like “The Downstairs Room” and “The Infinity Box” firmly established her at the forefront of her generation. The San Francisco Chronicle dubbed her “One of the masters of psychological fiction in America.”

Over the next five decades, Wilhelm went on to fulfill the promise — many times over — of her first wave of top-flight work. With forty-one stories across two volumes, these books amply show the breadth and range of her fiction…and the power of her storytelling, too.

With forty-one stories (reprinted from a wide variety of sources), a perceptive introduction by Jack Dann, and an informative afterword by editor John Pelan, these two volumes are troves of reading pleasure for everyone lucky enough to get their hands on them.

In the field for over six decades, Kate Wilhelm carved out a remarkable career highlighted not only by the quality of her own work, but by her tireless efforts to give back to the field and smooth the way for those who would follow. Equally well-known as an author of mysteries, she still found time to revisit the genre of speculative fiction. She also founded the Clarion Workshop with her husband Damon Knight and writer Robin Scott Wilson.

#452 as pictured all four top corners (front and back) are bumped as pictured (this is the back top corner of each book).  Does not look bad with the jackets in mylar, but if you want perfect copies these are not it. 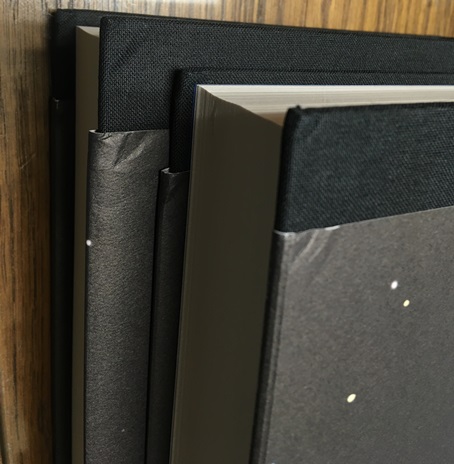